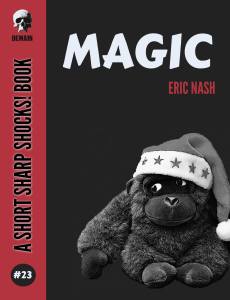 Ex-con Grange races against the shape-shifting terrors of the Wild Hunt for one last chance to see his daughter. Old magic is comin’ to town in the latest addition to the Short Sharp Shocks! book series from Demain Publishing.

This is a fantastic read for those who want a touch of well written menace without the blood & gore. The story engages immediately as the main character strives to put right the relationship with his young daughter, unexpectedly incorporating the darker side of his paranoia that would ordinarily be associated with night demons. But these demons come in wonderfully recognisable yet grotesque guises, some animal some pooka like, coming at him fast and furious in broad daylight.

An intriguing clever story that depicts images that will stay with you well after lights out and demands a second read.

Kindle version available at Amazon UK and Amazon US

Paperback at Amazon UK and Amazon US